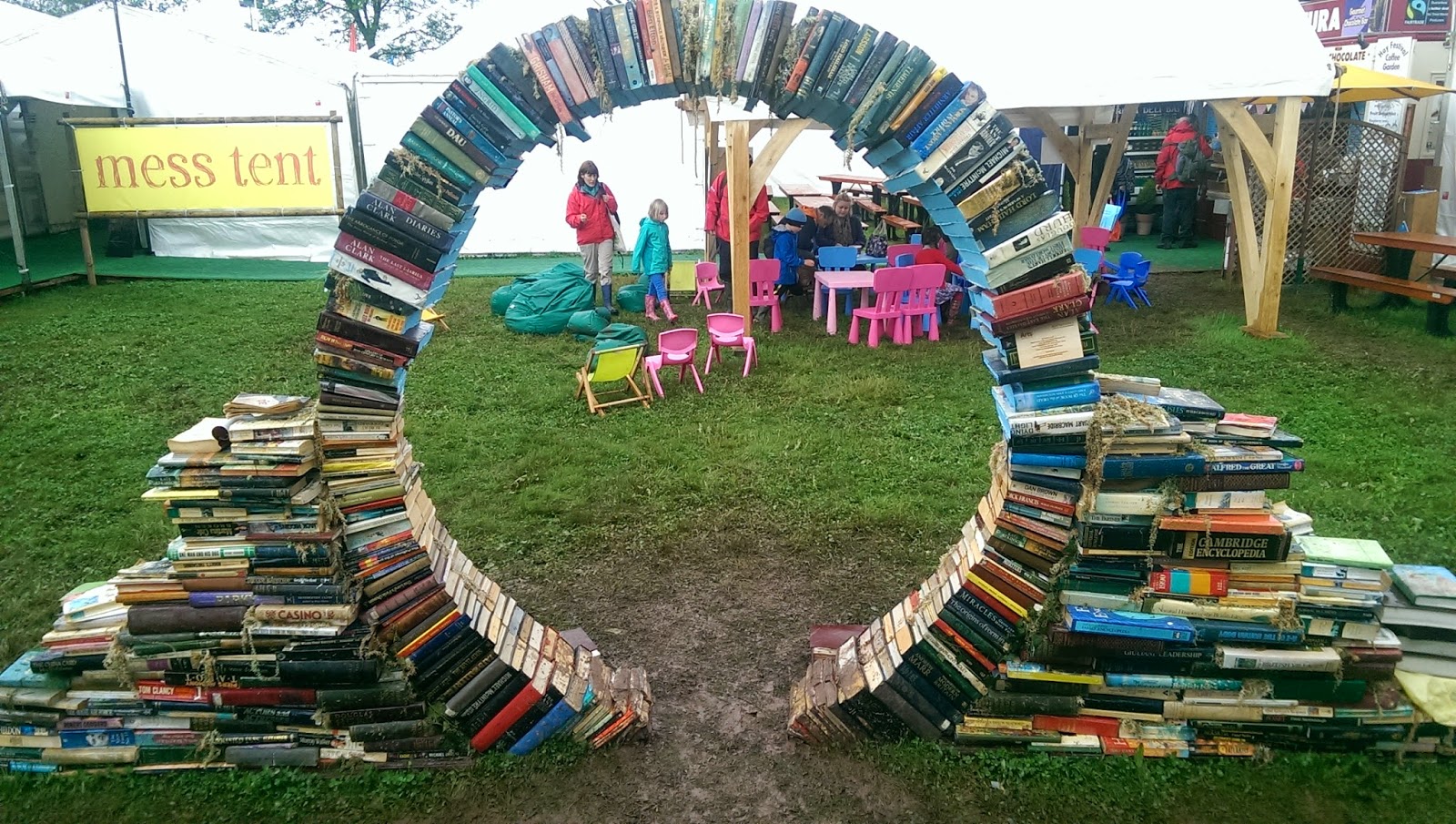 On Saturday the 24th and Sunday the 25th of May 2014 my family went to the Hay Festival in Hay-on-wye. It was a wonderful experience even though it was wet and muddy. It was a lot of fun and I even managed to purchase a few books (I’ll say more about that later). I met up with my friend Abbi and we had a lot of fun.

I spent the morning with my family wandering through Hay looking through the shop like stalls whilst sticking to the path since the awful weather had turned what once had been fields into some sort of mud bath, not that the rain showed any sign of stopping. It was during this time when we passed the sort of covering that they were using as a sort of interview area when my Mom spotted Cassandra Claire herself being interviewed. We pulled to one side and waited for her to finish. Then she stopped and took a photo with another fan before turning to me, having a  quick conversation in which I managed to tell her how she was my favourite author before she smiled for a photo. 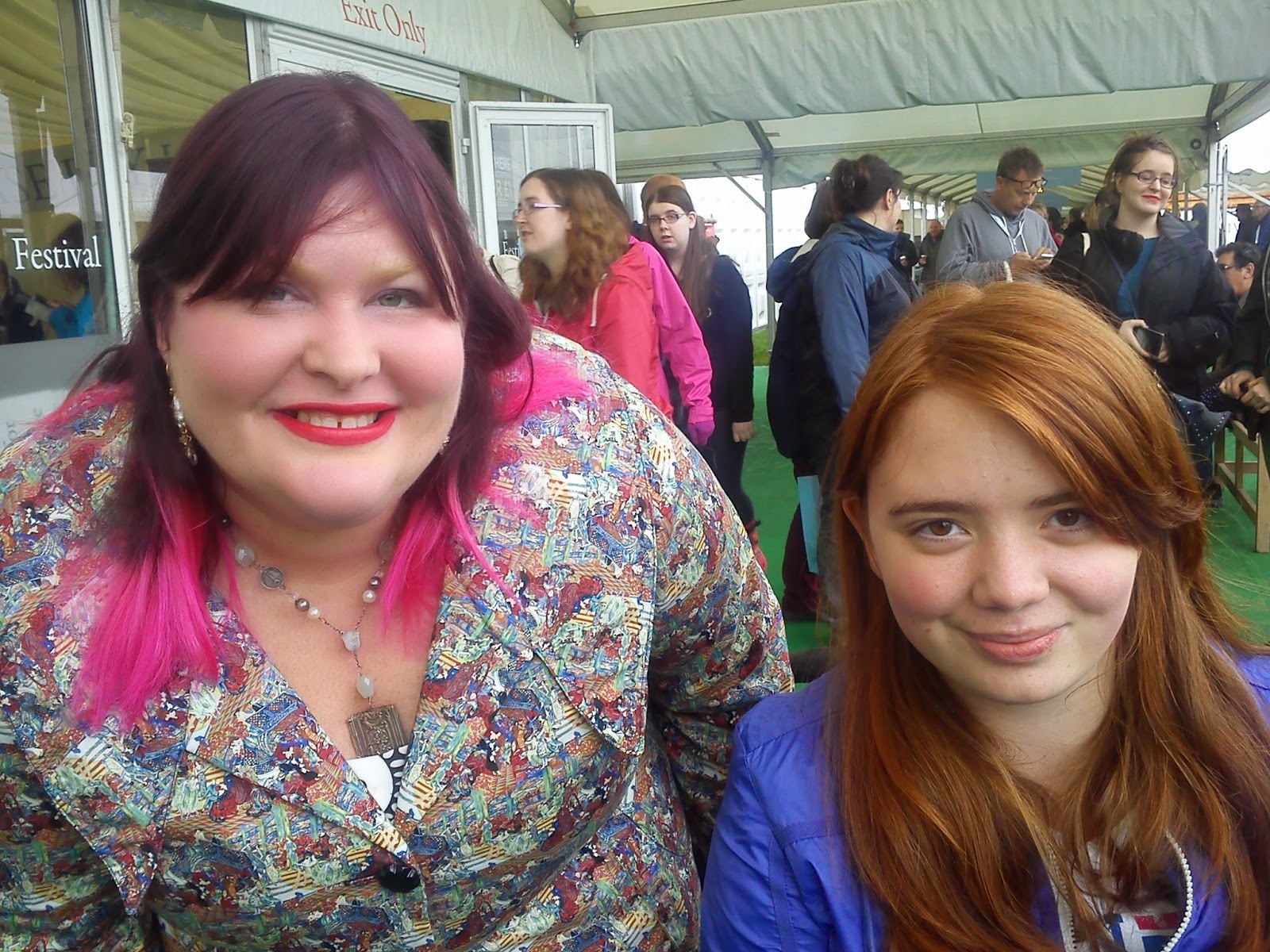 Then after that amazing encounter we headed to market style lunch place and got something to eat. I myself got a Margherita pizza, my Dad got a pizza that tasted a little more exotic whilst my Mom and Brother had a burger. The food was good on all accounts so there is no complaints here. After we each had finished, we cleared away our rubbish and headed to the large Hay bookshop where Abbi had agreed to meet over text. We spent a lot of time in that shop, with it shelves piled high with books as it was where the book signings were held. Abby had herself literally just come from Cressida Cowel's (author of the best selling how to train your dragon series) talk and book
signing when she caught up with us at last.

From there we headed to the stage where the Cassandra Claire talk was being held even though it meant we were an hour early. All that waiting however did pay off when we managed to get front row seats.

The talk itself (not to be biased) was amazing and really interesting to hear from the actual author herself. Not only did she talk about her main characters Jace and Clary she also talked on the lesser characters Simon and Izzy whilst especially focussing on Magnus, Alec and their relationship. The talk itself was relatively spoiler free, though I did need to cover my ears when they begain to discuss The Infernal Devices (I have just finished the second book). Cassandra even talked about The Mortal Instruments Movie and disclosed that she did not feel that the characters in movie matched up with those in her book to everyone’s happiness. I agreed with this as I believed that the film makers made major changes to most of the characters personalities, making them behave differently to how they did within the book. The next topic of discussion what the snippet of the bane chronicles, which are to be published as an actually book later this summer, which she had brought with her. The snippet was read aloud much to the audiences enjoyment. Then she began to answer questions asked by the crowd. We (the crowd) were told that the first person to ask a question would be given a prize as an attempt to bribe the crowd. I am lucky enough to say that I was able to ask the first question. The prize was revealed to be a clockwork angle inspired necklace that I have not really stopped wearing since. My question was: Do you find it complicated writing in such a world where everything is so interwoven and complicated. She replied to me with this answer: At first I used to find such a world a bit of a challenge, until we decided it was a good idea to compile my notes into the Shadowhunter's codex which has now become my bible for when I'm writing. I can agree with this as i too keep a writing journal to keep my ideas in one place.

Once the talk had finished there was a sudden rush of people flooding through the doors leaving the stage as an attempt to be first in line in Cassie's book signing. I, my Mom, Abbi were each worried by this but were fine when we saw that my Dad and Brother had jumped in the line once they themselves had seen how long it was getting. We did not need to wait too long only about 45 minutes which was much shorter than other people in the line. Even the Hay Festival volunteers told us that they had never seen a queue for a signing like it before. The queue itself doubled back on itself and I could not help but feel sorry for Cassie who was obviously going to be sat in her seat for longer than expected. Still once we did get to the front of the queue Cassie was really kind and even  remebered me from earlier on in the day. We had a quick discussion about how I liked the necklace and my favourite characters ( I told her they were Alec, Izzy, Magnus and simon though Jem and  Charlotte have both now been added to the list) before she signed  my copy of City of Bones.

We said goodbye to Abbi again not long after that. Before we went into the actual town of Hay and look around. Going into a few book stores before heading back to the festival and listing to a final talk by the BBC about the art of radio broadcasting, it was not of any particular interest to me but my Parents seemed to enjoy it. The reason for which I did not like it was because the topic of discussion had not sparked my interest. Then the four of us piled back into the car, grabbed some fish and chips and began the long drive home.

It really was amazing to meet Cassie she was really kind, taking the time to actually talk to me. Not to mention some of the difficulties they she faces when she herself is writing. It was interesting for me to hear from the experiences of an actually published writer and she encouraged both me and Abby to keep on writing.

The last thing I had planned on that Sunday was to be back at hay. To be perfectly honest I would have been content to have curled up under the covers with some tea and my new book. But that fantasy did not happen, instead we all piled back into the car and began the drive to Hay for a second time.

When we arrived I could tell straight away that it was going to be a even better day. The first thing that I noticed was the weather. Where the day before there had been rain, there was now sun. Of course this too had consequences, for instance the sun had most defiantly brought out the crowds and the mud from the day before was still there but nevertheless Sunday was a much brighter day.

The first talk we sat in was called Everyday Sexism with Lauren Bates. Lauren ran the blog called Everday Sexism where women could post stories of their harassment or issues without the fear of so called retribution. The response she had off women was astounding whether it was being heckeled in the street or much worst, stories came in form around the world. What worst perhaps was the amount of hate she received form internet 'trolls'. Everyday Lauren would and still does receive horrid messages about rape and murder. They were not stopping even though she had done nothing wrong. She told the audience how in fact sexism is still around no matter how people just dismiss it. She also told us that such actions from men or women was not just 'normal' and how we could go to the police. Lauren will often go into universities and was appalled by how the majority of girls were unaware of the fact that consent existed never mind what it was. She told us horrid stories of sexism and wonderful stories of both men and women standing up saying sexism is wrong. The talk itself was empowering and informative. I learned that a lot of things in the world do need to change but slowly things are beginning to change and that is good because if I took anything away from that talk it was that being a feminist means that you want both sexes to be equal not anything else.

We did not even have time to think over the things that Lauren had told us, since we then had to rush to another stage on the opposite side of the festival to get to our next talk. This carried on through two more talks until we finally had enough time to head back to the car and eat the small picnic that my Parents had brought from Tescos earlier on that morning.

After lunch we headed to another talk. This one however was just one for my Brother and I. It was called Ghouls and Ghosts Horror for Teenagers. Hosted by two horror writers Matt Whyman and James Dawson. James Dawson talked about his new book surrounding the famous urban legend bloody Mary. This then led the talk to a discussion about Urban legends themselves and how everyone in that room would each have at least a slightly different version of an urban legend to tell. That was my favourite thing about this talk was the sheer amount of audience participation whether it was asking us questions or asking us to tell stories the audience was fully involved. Then the two began to talk about Matt Whyman's new book: The savages. This particular story was about what happened to a family of cannibals when their daughter announced  that her boyfriend just so happened to be a vegetarian (I picked up this book at the end of the talk- it was truly chilling). Then they discussed the elements they believed should be in horror books for teens and their personal experiences with horror. If there was one thing I learned during this talk was how lucky we are now to have specified teenage horror books as for people the same age as my parents went straight to reading Stephen King books which was rather inappropriate.

For the rest of the day we attended a few more talks and tried to stay dry through the sporadic spouts of rain. We had a wonderful day until we climbed back into the car and headed home, stopping off at MacDonald's for tea

Our experience at hay was a good one. We each had a lot of fun, the only issue was especially on the second day was the crowds. For a girl in a wheelchair who is claustrophobic it was especially an issue. My mom did tell them this and hopefully with a bit more planning it will be an issue they will be able to fix for next year as we already have plans on going. Despite the fact it poured through most of our weekend not to mention I think we still haven't washed all of the mud off of our boots We had the most marvelous time and I would strongly recommend it to anyone.

Posted by Hawthorn Crimson at 07:55 No comments: