On Thursday 10th October 2013 my Mother and I went to the Alexandra Palace knit and stitch show. We both had a wonderful time and I can not wait to go again. 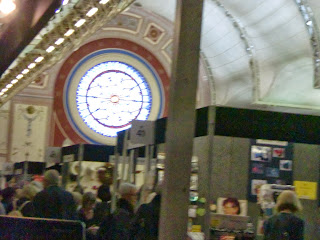 We awoke at around 6:30am and got ready, then my Father dropped us off at the train station so that we could catch the 8:15am train. Our travel time was an estimated hour and a half. We then arrived at Euston train station in London, before catching a taxi and arriving at the show for 10:30am.

The first thing when we arrived outside was a taxi, in a completely knitted cover. When I talked to some of the people who did the cover they revealed that they were a knitting group called materialistic's who had undertaken the challenge on behalf of a new author who's book comes out November 2013. The project had taken the group approximately six weeks of which they had the taxi for a period of two days. The taxi itself was covered with brightly knitted panels and decorated with little knitted creatures like ladybirds or caterpillars with French knitted words along the back of the sides. The knitting was very well done and you could see that they had put a lot of time into it. 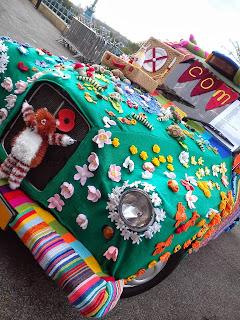 We then went inside. There was a large queue of people when entering the exhibit due to the fact that they had not brought their tickets before hand, luckily my Mom had so we did not need to wait as long. We then began to look around the few exhibits that had been included in the corridor outside of the hall. Including one from a group called FAD (Fashion Awareness Direct) when a lovely lady who was one of the exhibitors approached us and asked whether I would like to join a sustainable fashion workshop. Of course we agreed and she pointed us in the right direction towards the stall where the workshop was taking place 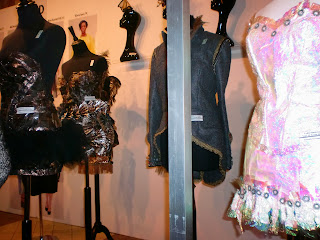 When we arrived at the workshop we saw that it was being ran by a group of about five different university students who all worked with FAD. The first thing they did was ask my Mom to sign a piece of paper whilst one of the other girls asked me whether or not I could knit. When I replied that I could they were all very surprised.
I wheeled up to the table and they gave me a selection of different patterns from which I could chose one to try. I chose the bow tie necklace that I would then make whilst my Mom went and had a look around.
The first step was to make a plat long enough to fit around my neck, before moving on to the next step that was to knit a rectangle. Finally make a second plat and tie it around the rectangle to form a bow and pining it to the longer plat. This is your finished necklace.
The girls were all very impressed with my skills . Then we signed the last of the papers before carrying on with our day. 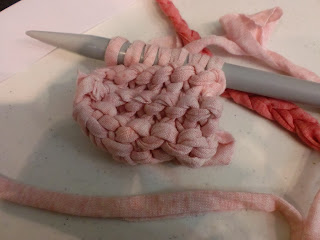 The next thing we did was have lunch which was a sausage roll for myself and a Cornish pasty for my Mom. 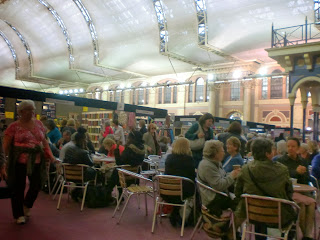 Once we had finished our meal we continued to look at the stalls set up around the hall. There was a great variety of things either on sale or at least on show. I brought several balls of wool in different colours like red, purple and even multi coloured for Harley Quinn, Lockheed the dragon and my Mermaid respectively 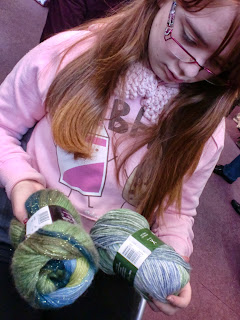 Then I went to a workshop that my Mom had signed me up for earlier in the day. It was learning how to make a mouse with Vanessa Mooncie a new author who has recently published her new book on crocheting animals. She was a really kind person and I even got to ask her a few questions like: How long have you been crocheting for? She replied: I learnt to crochet back when I was a young girl but never really got into it until about ten years back. I also asked her what is your favourite thing about crochet? She replied: My favourite thing about crochet is probably how portable it is as you can take it practically anywhere with you. I really enjoyed the workshop and had a lot of fun whilst making my mouse (named Marshmallow).At the end of the workshop if you had not already completed your mouse you were allowed to take the pattern away with so you could complete it at home. 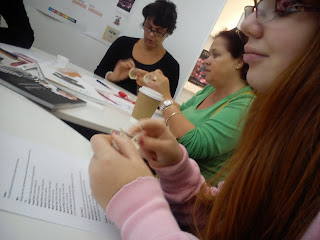 When we finished at the workshop we continued to look around the stalls that shelved everything from wool and embroidery floss to buttons and bejeweled crochet hooks and knitting needles. It took quite a while for us to get around simply due to how many stalls there were and how busy the show was. There were quite few people crowded with in that room.

Then eventually when we had manage to look at, at least most of the stalls when went into the hall opposite and began to look at the exhibit. Though it was mostly knitting it was still very impressive to see all the different styles and stitches on show. The exhibition was made up of several different exhibitors including the
London School of Fashion. Fashion was most defiantly the item that was on show the most but it was interesting looking at the different jumpers and other items on show. 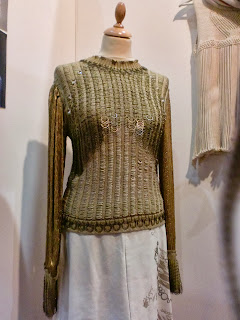 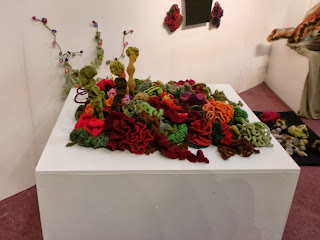 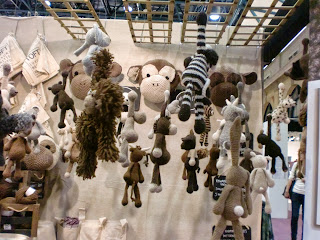 The last thing we did was look around the last few stalls before we caught a taxi to the train station, had dinner and headed home.

As I have previously stated I very much enjoyed the show though the only problem was that the hall was far to crowded and to a wheelchair user like me this could become very distressing. Another problem that the two of us encountered was that the only way that the Alexandria Palace was in any way accessible was via taxi though I understand that this is not the organiser's fault. There were many workshops going on throughout the day and with more awareness we would have been able to attend more. The stalls themselves were all lavishly decorated with different items and I believe that there was something there for people of all skill levels.

Overall I can honestly say (as previously mentioned) I very much enjoyed the show and hope to go again.
Posted by Hawthorn Crimson at 03:03 No comments:

This is the pattern I have used for my first doll, it is a revised version of this pattern:

So all the original credit goes them.

This is how to crochet a basic female doll it takes practice but make a great doll in time.

You will need:
some yarn
something to make the face of the doll.
A small crochet hook
some toy stuffing.

Abbreviations:
Stitch (st)
Increase (inc) = Two stitches in one,
sl st= slip stich
*....* = repeat until you have the number of stiches in the brackes

Arms and Legs
5. dec st in next 7 st (8)
if making legs do an extra 5 rows.
Stuff
Fasten off with sl st, make two arms and two legs

Body:
hold together legs, insert through one loop in each and yarn over.
Continue corocheting on stiches of both legs until you have sixteen stiches- this is how the body starts

add hair and clothes and enjoy your new doll.

Posted by Hawthorn Crimson at 02:52 No comments:

I am about to start my third of four arts awards my arts award silver.
Arts Challenge: My arts challenge is to improve my crochet and amigurumi skills by creating several crochet plushes (dolls and a dragon).

I will be posting my progress onto my blog and i shall be keeping a scrapbook throughout my journey.

I am excited about this challenge and hope that it will be as much fun as my previous award.
Posted by Hawthorn Crimson at 02:37 1 comment: