My first of two influences for my costume design is Michael lee lunsford he is a male free lance artist aged twenty seven who is currently based in the USA. His main drawing interest goes to making his web comic Supernormal-Step, he too does commission however he does not do as much as Elizabeth as he does not have as much time.
Michael Lee Lunsford who had recently given himself a challenge. He has completely redesigned some of Dc's (the comic company behind heroes like Superman, Batman and Wonder Woman) most famous heroines.

His aim was to design the characters outfits in a more realistic and appropriate manner. As many super heroines are known for wearing really quite revealing clothing. A problem which I personally believe he has solved.

I found Michael’s artwork really inspiring as I also feel that he has brought new ideas to their many costumes, which I must do agree can sometimes be far too skin tight.

Looking at this from a cosplayer or costume lover point of view it makes me have even more respect for these pieces because not only do I feel that he has been able to not only redesign the characters whilst keeping to their original themes but also I feel that if people were to cosplay the characters like this instead of how they do, it would be a lot more respectful. 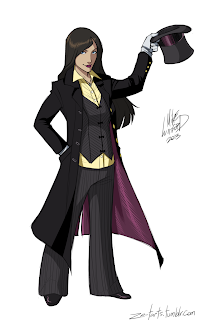 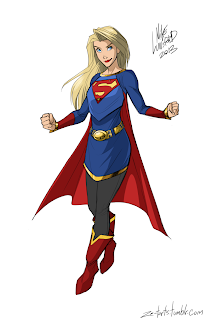 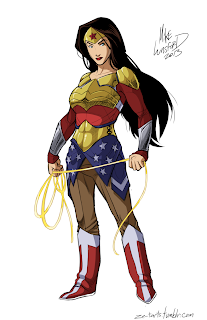 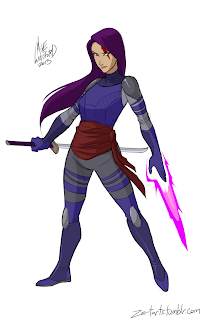 
Elizabth Beales is a female artist who is currently a free lance illustrator who is based in Atlanta, Georgia, USA. She did go to an Art College though I am unsure which one as she has not disclosed the information of where it was.Elizabeth currently lives off of the money she makes from doing commissions and other pieces of art work.Elizabeth designs characters as if they were real people alive today based around their super costumes.


I enjoyed the concept behind her artwork and find her style of technique useful when wanting to do a subtle character inspired outfit. Where the clothes are concerned I think that she did a good job (some better than others) at portraying the characters concept. 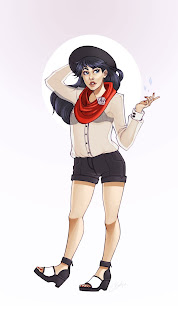 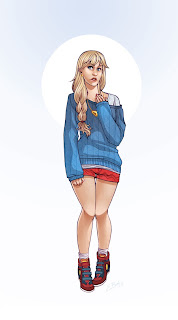 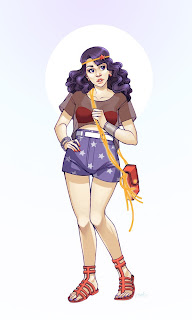 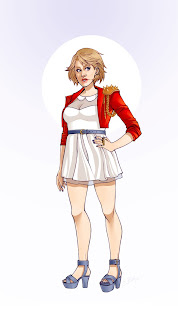 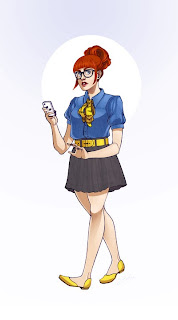 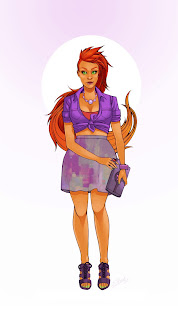 I chose these two artists because I loved their approach to the characters. Michael Lee Lunsford not only makes these famous heroines fully clothed (unlike so many of the offical comic artists) but also makes them take on a more military style all wearing gloves and combat boots for instance, that i wanted to reflect in my costume. Elizabeth Beals take a more real world spin on the characters, as they all wear modern day clothing. This is another aspect of the characters that i wanted to show.

I found out about these two artists through the internet, as they were featured on a website that I follow.www.nerdygirl.com The first step I took in my research was to google them and go to their websites/deiveintart accounts, where I then looked futher into their art before continuing to find out some information about the two of them. Once I had done that I built up my research piece

These two particular artists influenced my art in the following ways: Micheal's artwork inspired me to take on a more miltary approach to my costume for example:my gloves, utility belt style and combat boots. Elizabeth Beals inspired me to take a more modern twist on the character for example:my t-shirt and leggings making for a more interesting costume.
Posted by Hawthorn Crimson at 02:21